FOUND:  Island of Hispaniola, in the Caribbean Sea

AFFIRMATION:  I am cool, calm and serene, yet fully in touch with my feminine power, and I clearly communicate my wisdom and desires.

Energetic and Healing Benefits of Larimar 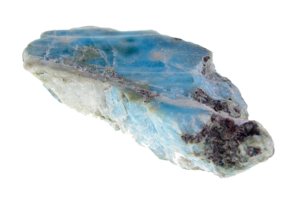 Larimar is a rare stone of whimsical and ethereal beauty.  Found only in 4.4 square miles of the Dominican Republic on the Island of Hispaniola in the Caribbean Sea, it is a fairly new discovery found in only this one place in the entire world.

Larimar embodies the energy of both the Fire and Water elements from which it was created.  Just as the Sea cooled the fiery volcanic lava, Larimar’s energy has a cooling and soothing effect on both the physical and emotional body.  It is a stone which relaxes energetic “knots” and releases stress bringing calmness and serenity into one’s being.

As a stone that connects one to the Goddess energies of Sea and Sky, Larimar helps women who wear, or use it, to awaken to the Divine Feminine within.  It brings not only a sense of serene tranquility, but also a vivacious playfulness and a sense of one’s innate inner strength and power.  It helps women call upon the “goddess within” to find and fully manifest their highest purpose in life.

Larimar promotes a sense of confidence and well-being, tapping into inner knowledge and wisdom to allow one to manifest those things that one most desires.  Larimar encourages one to respect, love and nurture oneself so one can have the inner resources to give these gifts to others.

Larimar assists in identifying self-imposed limitations and self-sabotaging behavior, especially toward martyrdom, and encourages taking control of one’s life. It is particularly useful in admitting guilt, when guilty, and in bringing about a sense of peace in truthfulness with both ourselves and with others. At the same time allowing us to see when we are being too harsh with ourselves and leading us back to an inner consciousness of the divine within us.

Larimar is a powerful throat chakra stone which assists us in effectively communicating with others.  It helps us create energetic boundaries to heal and nurture oneself and express these boundaries in a way that others can accept without anger or resentment.

It is a powerful stone of healing and balance that allows one to move away from unhealthy relationships and attachments that no longer serve one. It helps calm excessive fear and diffuse explosive anger. It facilitates deep emotional release, and encourages the clearing of deeply embedded emotional patterns. It can help break down emotional dams one has built up around the heart and draw on inner reservoirs of peace and tranquility. 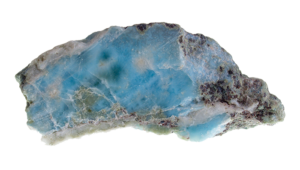 Larimar brings a new consciousness and awareness to one, and establishes stronger emotional stability by not attaching one’s happiness and joy to external things that are out of one’s control. It brings a feeling of “rightness” in the world, despite outside influences, allowing us to tap into the Divine and live in the present moment.  An inner knowledge that all things happen for a reason and always for the greater good.  It helps one to reconnect to a previous, more natural state of playfulness and joyful childlike energy.

Larimar can help those who continually complain “that things are not as they should be” to become more present and learn to love “what is.”  It assists those in a continual state of resentment to release egoic judgement and learn to accept the Divine.  Larimar is a powerful emotional cleanser and healer.  It is especially useful for those with phobias, extreme anxiety, panic attacks and other stress related imbalances.

Larimar is a wonderful stone for mothers during and after pregnancy.  It can alleviate post-partum depression and assist with the stress related to being a new parent.  It may also be used to diminish the frequency and intensity of hot flashes, and when one’s kundalini energies have become uncomfortably active.

Larimar’s energetic frequencies can reduce muscle tension, spasm and adhesion’s and it also acts upon inflammation, infection and fever.  It is an excellent stone to use during colds and flu to help regulate mucus production, sore throat and fever and it can also be useful in treating hives, rashes, eczema, psoriasis and other skin disorders that are aggravated by stress.

Placing Larimar in your home or work environment will bring tranquility and serenity.  Relaxation is one of the premiere benefits of Larimar as it soothes and calms the inner soul.  Wearing Larimar, especially as a pendant or necklace, activates the throat chakra in communicating with one’s self, others or the divine. Using it in a “laying-on-of-stones” treatment will assist in releasing one’s inner voice and tapping into one’s deepest inner wisdom.  Singers also often wear Larimar as a talisman for enhancing and protecting the voice.

Larimar utilizes Water energy, the energy of stillness, quiet strength, and purification. It embodies potentialities unrealized. It is yielding, formless, yet powerful. The Water element brings power of regeneration and rebirth. It is the energy of the circle of life. Use Larimar crystals to enhance any space that you use for repose, calm reflection, or prayer. Water energy is traditionally associated with the North area of a home or room. It is associated with the Career and Life Path area, its flowing energy assuring a balance of energy as your life unfolds and flows.

Benefits of Meditating with Larimar

In meditation Larimar can help one tap more fully into one’s inner wisdom as well as connecting to the Divine.  It can help one recognize and accept the limiting beliefs and patterns that one has entrenched into one’s life, and release those bonds in a healthy and empowered way, manifesting new patterns that represent the greater good.  It opens the pathway to “Divine Ascension” and upliftment of the spirit through a stronger connection to goddess energies that guide us to inner peace.  Meditating with Larimar brings spiritual connection, deep relaxation and a calm soothing tranquility within the soul.

Larimar effortlessly induces a deep meditative state, raising consciousness and harmonizing the body and soul to new vibrations. It dissolves the boundaries of spiritual self and allows one’s true pathway in life to be revealed. Larimar facilitates angelic contact and communication with other realms. [Hall, 174]

The Discovery of Larimar

There is no date showing when the native Dominicans first came across this rare and beautiful blue stone.  It is said that they first noticed the light blue stones at the bottom of a river that empties into the Caribbean Sea.  They initially thought the stones came from the sea and called the gemstones “blue stones,” but eventually by going against the flow and following the river upstream to its source near the top of a mountain they discovered a mine full of the blue gemstones.

Then in 1974, at the foot of the Bahoruco Range along the coastal province of Barahona in the Dominican Republic, a Dominican doctor named Miguel Méndez and Peace Corps volunteer Norman Rilling, rediscovered Larimar on the beach. The few stones they found were alluvial sediment, washed into the sea by the Bahoruco River. An upstream search revealed the in situ outcrops in the range and soon the Los Chupaderos mine was formed.[1][2]

Dr. Mendez took his young daughter’s name Larissa, and the Spanish word for sea (mar), and combined them to name this gorgeous new gemstone “Larimar,” for the all the beautiful blue colors of the Caribbean Sea where it was found.

The largest and most important outcrop of blue pectolite, known as Larimar, is located at in a 4.4 mile area of Los Chupaderos in the south-western region of the Dominican Republic. It is a single mountainside surrounded by rainforest vegetation that hasn’t changed much over the centuries.[1][2]

Larimar is a rare blue variety of Pectolite. It occurs as needle-like crystals, grown together in a solid mass and forms in cavities within basaltic lava. The copper substitution in Pectolite instead of calcium produces beautiful translucent shades of soft blues, white and turquoise marked with streaks and patterns of white, and may contain red or brown areas of oxidation or Hematite inclusions. The more intense the blue and contrast within the stone, the rarer and higher its value. (Simmons)

In 1979 Larimar was classified as a « semi-precious stone » that is rare and unique.  At this time, this small area of the Dominican Republic is the only location in the world where this beautiful and rare blue gemstone can be found.

Larimar in History and Legend

Larimar is sometimes called “Atlantis Stone” in reference to an ancient prophet’s declaration that Atlantis was once part of the Dominican Republic, a claim affirmed by various authorities in metaphysics. This association makes Larimar very important in the world of metaphysical gems. This same ancient prophet further declared that what made Atlantis great was the beautiful blue stone that carried incredible healing powers. Its description bears an uncanny resemblance to Larimar.  [larimarjewelry.org]

Legend claims that Atlantis was once a great civilization of learned people who were half human and half god.  They ruled their island nation, and the seas, until their civilization sank into the sea in a single day and disappeared forever.